So you wanna Renovate?

The old roof was rusted and needed a facelift. The cheapest way at the time was to spray paint. The inside was priority to us.

Looking a lot better to the eye but still an old barn.

Look -- we had a choice. Tear it down and start over or leave it standing. The foundation was solid as was the structure itself, so we left it alone. Much thought and many sleepless nights went into this thinking pattern. We felt we had a responsibility to this elderly fellow who built this old barn. He was proud of it and we didn't want to reduce that pride in any way.

As weeks went by, our dream was starting to take shape. We had some arguments about colouring but white eventually won out as the cleanest and freshest look.

The inside was starting to take shape and we were able to tweak this and that around until it suited what we wanted it to look like.

The 45' arch was a big decision. How to do it, what materials to use, where the lighting would go, etc. All this created headaches and was it really worth it.

Such a mess, so many days and weeks went by. Would it ever be finished? Fired one crew, brought in another crew. Decisions, decisions. Were we doing the right thing?

It became clear that there was no turning back. Not just the barn had to be renovated but the main house itself had to be gutted and revamped. Would the money hold out?

I had my doubts about the whole venture, but 30 years of starting up new businesses told me to press on and follow my dreams and do lots of praying with this one.

My GOD ! It's finally done and it's looks amazing ---- better than in my dreams. I told Judy it had to look like Buckingham Palace and the White House all in one. That required columns but solid columns would cost a fortune. Hmmm --- sonotubes could be the answer ---- Make it so. Amazing how we think?

How about heat? This sucker heats the place nicely with a fan in front to push the heat and the big ceiling fans hanging from the archway keep pushing it to the back

A little furniture gives it that Home Sweet Home appearance. But this isn't for humans. This is for our little furry guests ---- cats. Who woulda thought cats should get treated better than humans? ------------We did.

Now that it's done, would anyone come to us? It didn't take long to get the answer. Work was completed by late November 2010 and with the help of something called The Internet, The Pussycat Hotel was full to capacity that very same Christmas period and continues to serve hundreds of guests year after year. 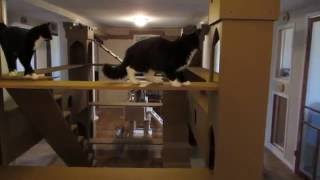 So you wanna Renovate?